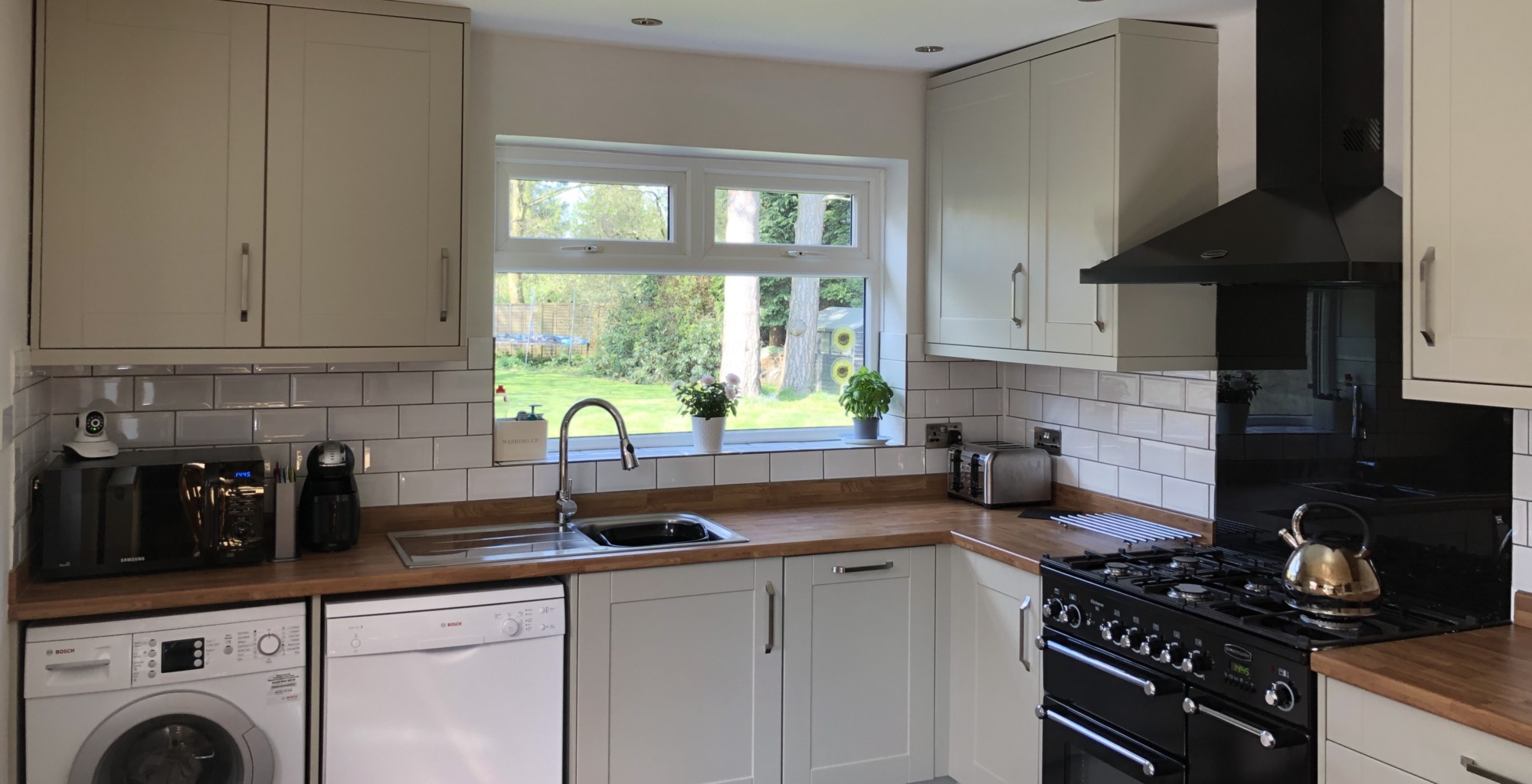 A fairly dated kitchen in a 1950's style house in the Caterham area was showing signs of wear and tear. We looked at options for replacing kitchen carcasses and doors, but having costed out the solution between that and fitting a new kitchen, the home owners decided to start again.

The original kitchen was not only dated, but badly designed with too many units; many of which remain unused. There was a centre console that blocked out a lot of the light but created a kitchen and separate kitchenette area. The centre console, coupled by only a couple of ceiling lamps, meant that the lighting in the kitchen and dining area was really poor. The family spent a great deal of time in the kitchen, so maximising the space and comfort was key on this project.

Running along the floor in the room was a distinct threshold separating the kitchen from the dining area, it was raised as the floor went from the original parquet to a tiled surface area, this caused somewhat of a trip hazard, as well as looking unsightly. 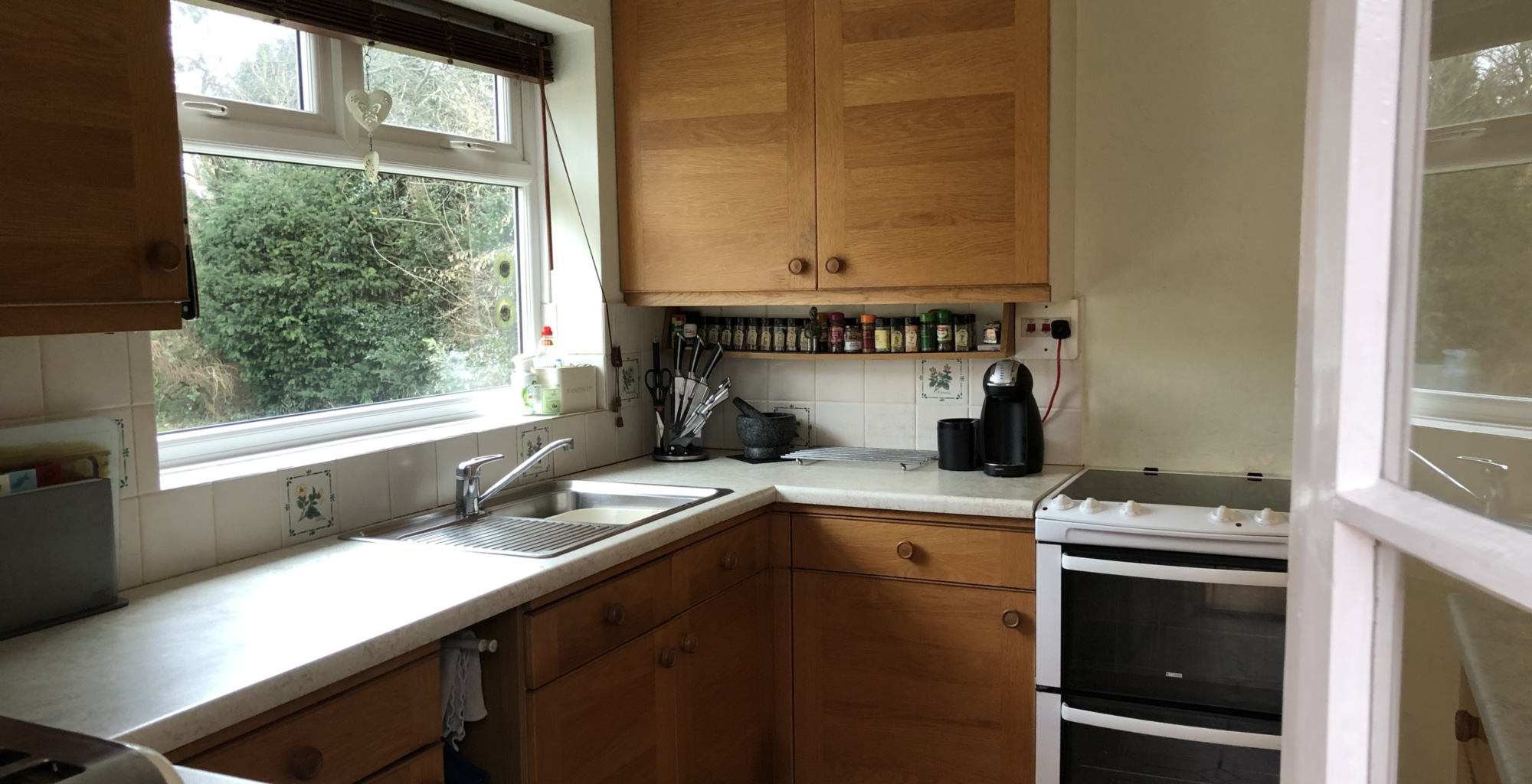 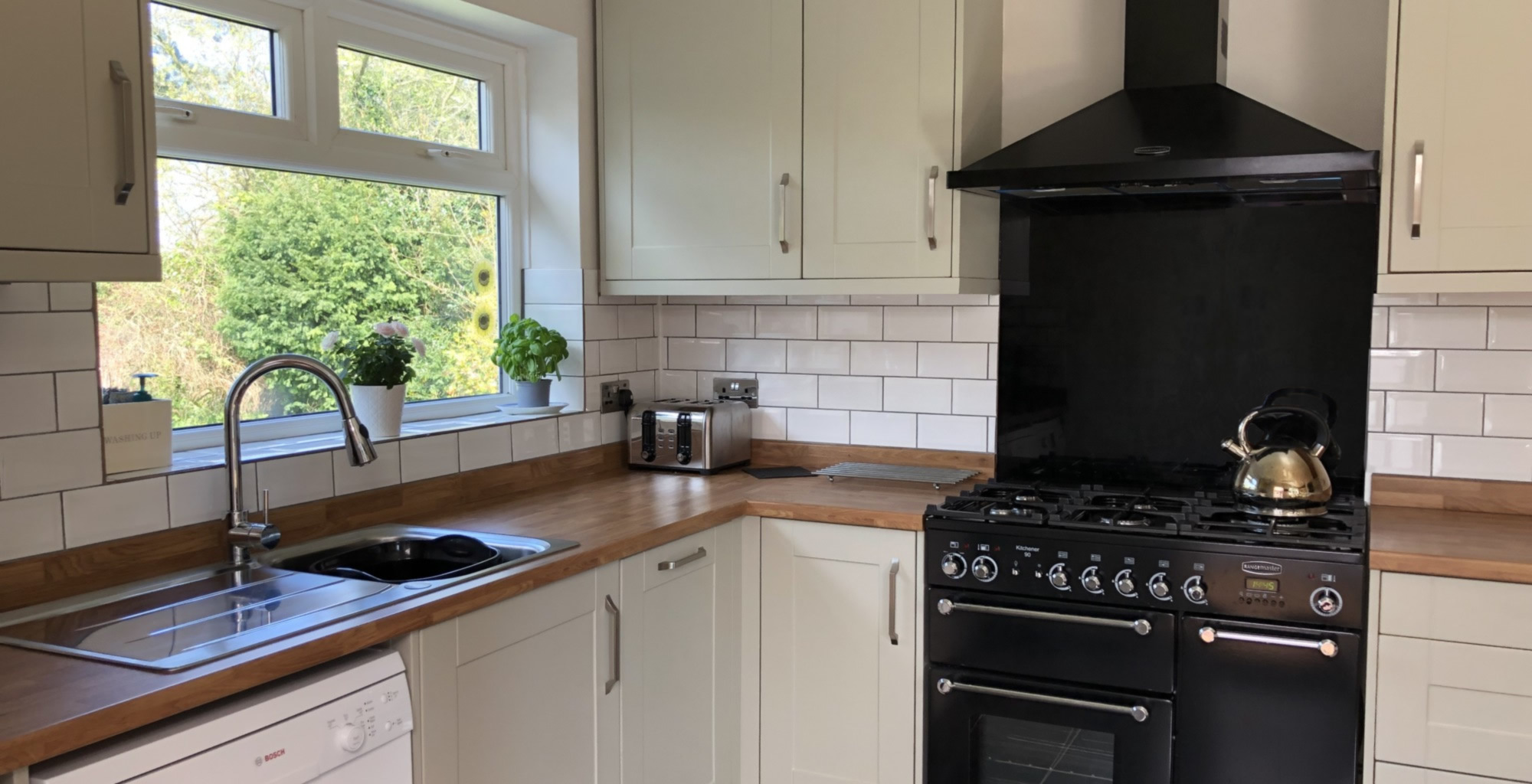 Ceiling: Being an older home, the level of the ceiling was uneven. This only became apparant whilst offering up wall units to the ceiling. We had to ensure that the finishing surrounds to the top of the units looked correct and level from the various angles against a ceiling that wasn't quite true.

Gas Installation: Having gone from a stand-alone 4 hob electric oven to a range cooker, there was no provision for any gas within the kitchen. Fortunately, the gas feed into the house was closely located within the adjoining utility room. We initially looked at options for routing the new gas pipe under the kitchen floor, but as we shortly discovered once more with an older home, the floors were solid concrete, so the preferred option was to route around the new kitchen floor units.

Flooring: Having originally had carpet into the kitchenette area, then tiled floor into the kitchen, there was a rather untidy and steep threshold. Once the carpet was removed, this left rather attractive and very inkeeping parquet flooring, which was to be retained. To provide a little more warmth underfoot, the kitchen floor tiles were relplaced with a really nice vinvyl with feature strips to give the tiled look. Removal of the original kitchen tiles then exposed another set of quarry tiles on top of a concrete based. We had no alternative other than to use a heavy-duty breaker to take expose the concrete floor. Once done, a leveling screed was used to provide a nice clean and even surface to lay the laminate.

Having worked with various kitchen designers and looked at a number of layouts and designs from well-known companies, the family decided to draw on the skills and expertise of Sandford Homes. We provided them with an independent review and summary of what would work best for them, and not just from a sales perspective.

The customer decided to go choose a shaker-style kitchen opting for the tall, raised kitchen units which finished at ceiling height. This gave them a little more cupboard space without overloading the kitchen with units. Keen on cooking and entertaining, the customer also opted for a gas range cooker instead of integrated oven and grill.

Having recently only just replaced a free-standing washing machine, they decided to go for a matching model dishwasher, not having had one in the kitchen previously. The original placement of the sink was centre aligned under the window, leaving very little usable space to each side. We worked on a nice work-flow of the kitchen incorporating a preparation area to the right of the sink, under with window with plenty of light, round to the stove and then plating-up / serving.

To brighten the kitchen up, Sandford Homes installed 16 LED dimmable celing lights with daylight bulbs, strip lighting under the units and small subtle lighting in the kick boards. All lighting and electrical work was carried out by Sandford Homes, saving the customer having to source an independent electrician. 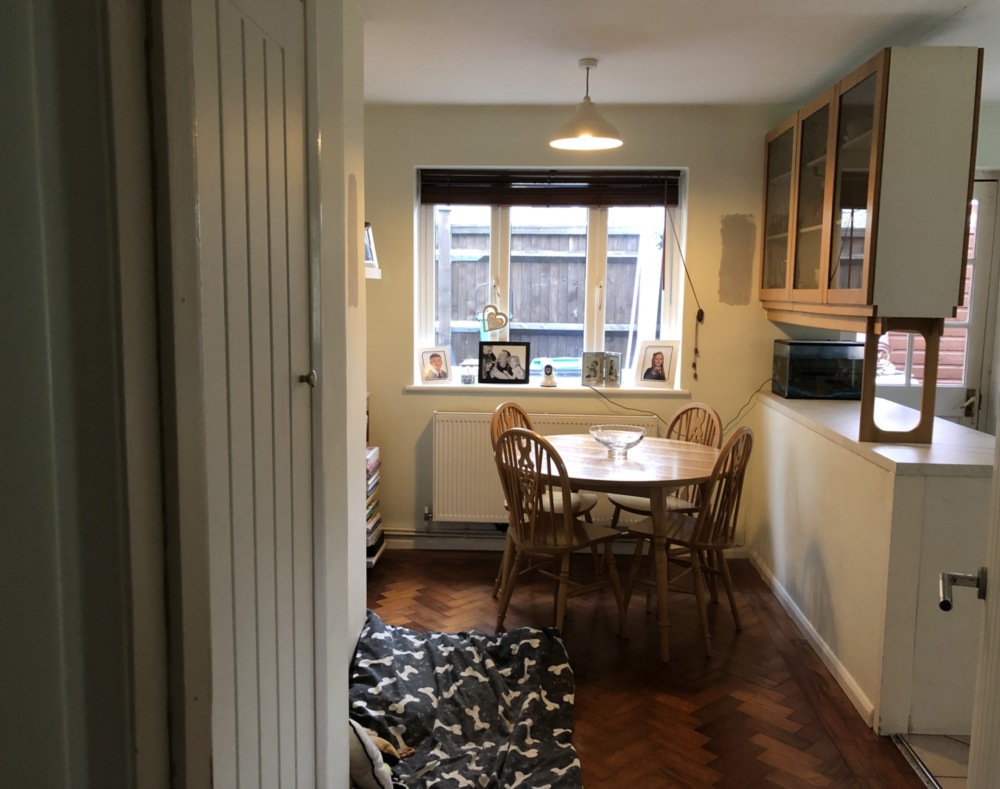 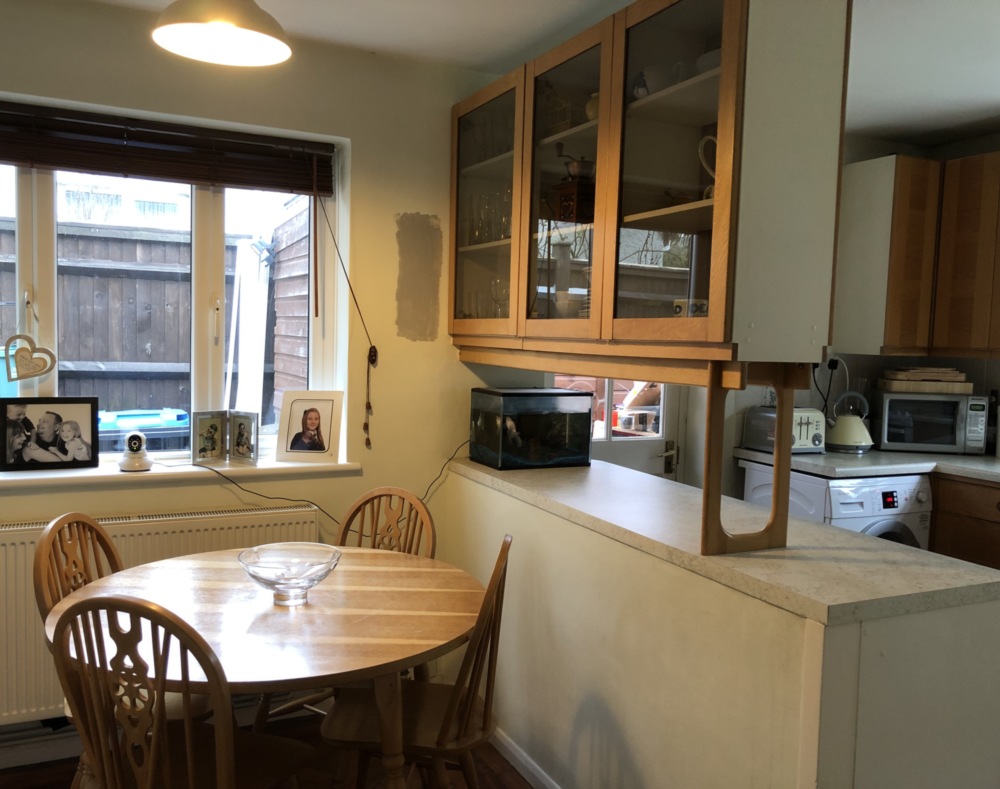 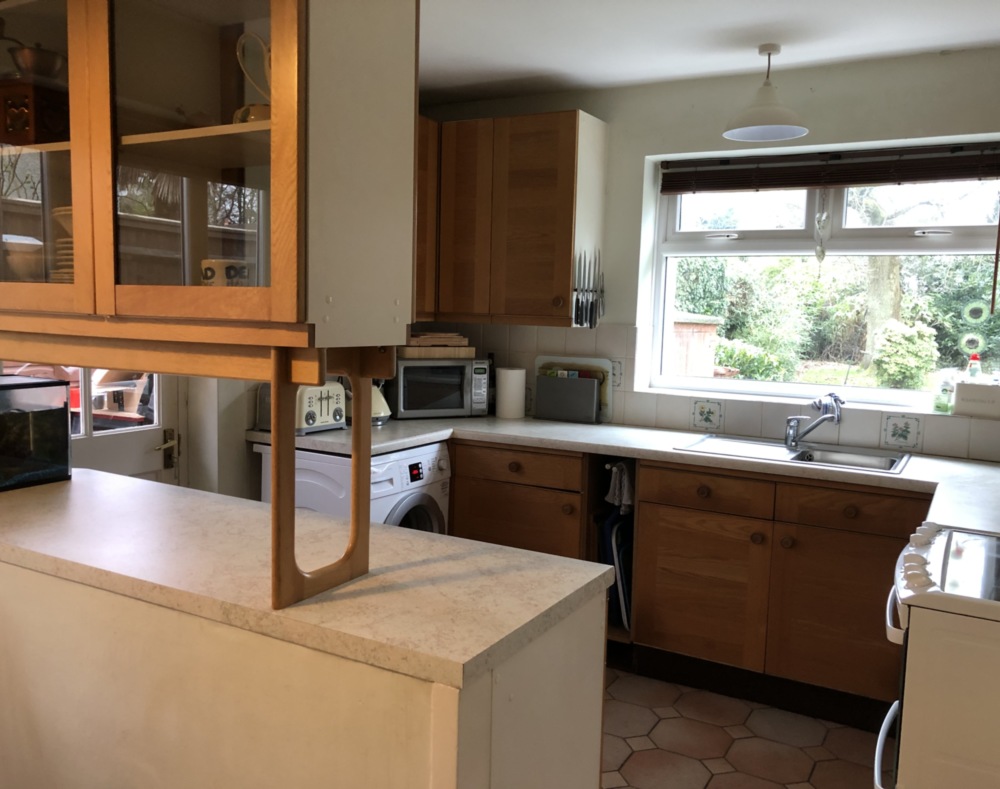 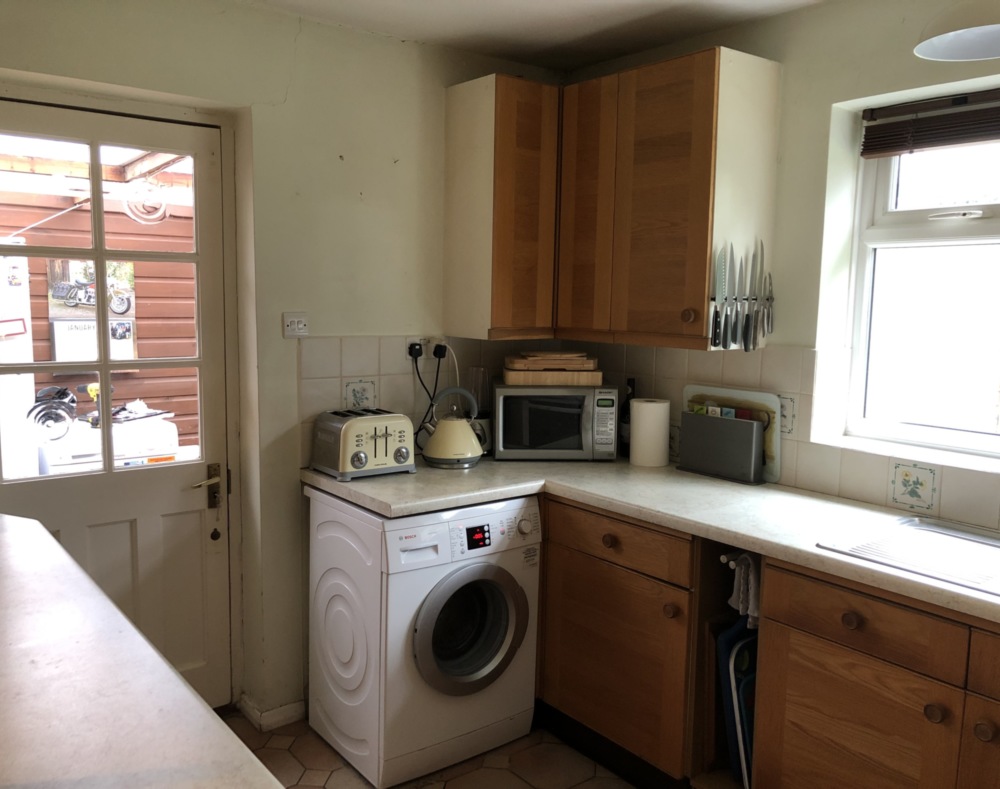 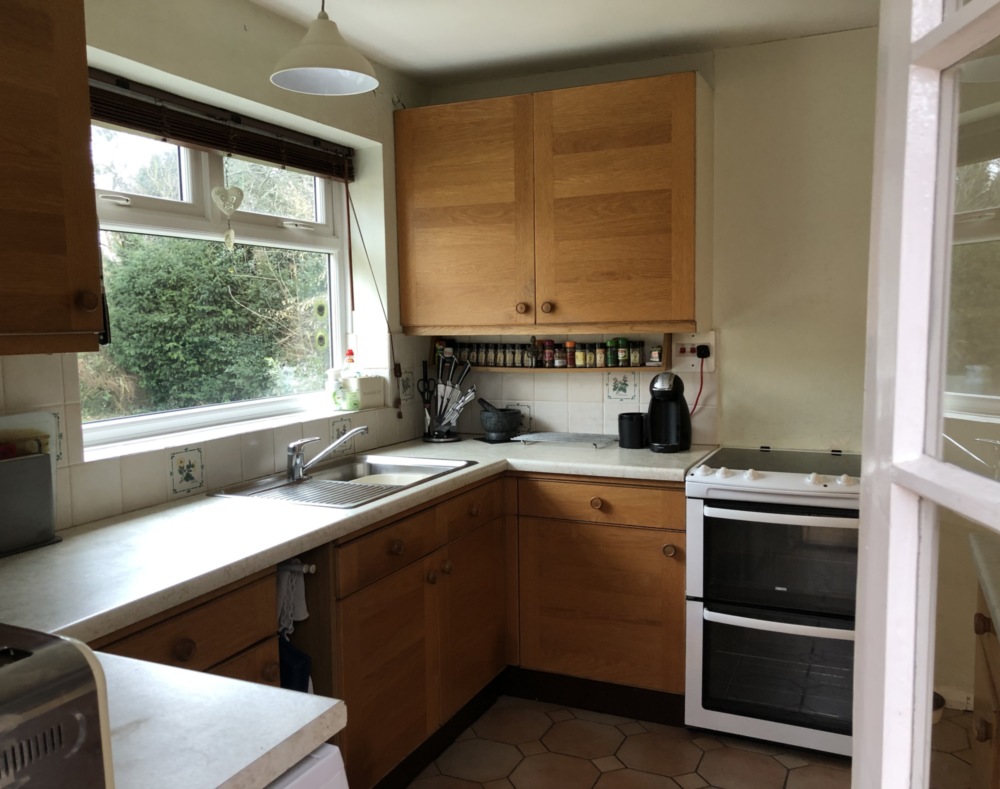 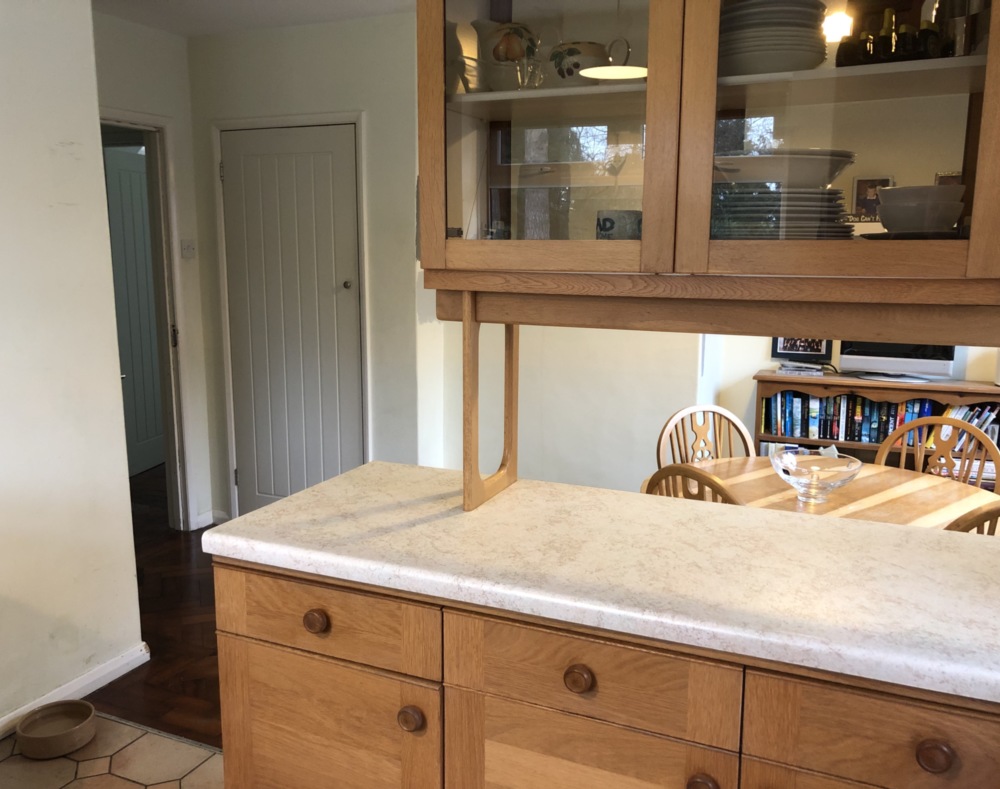 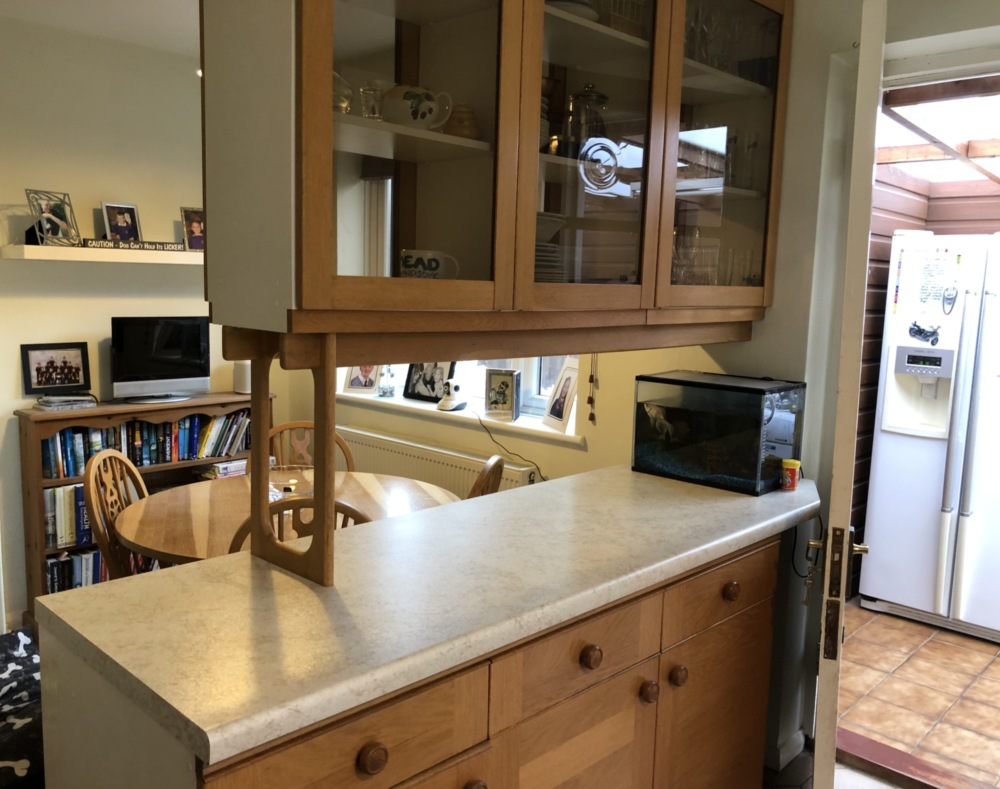 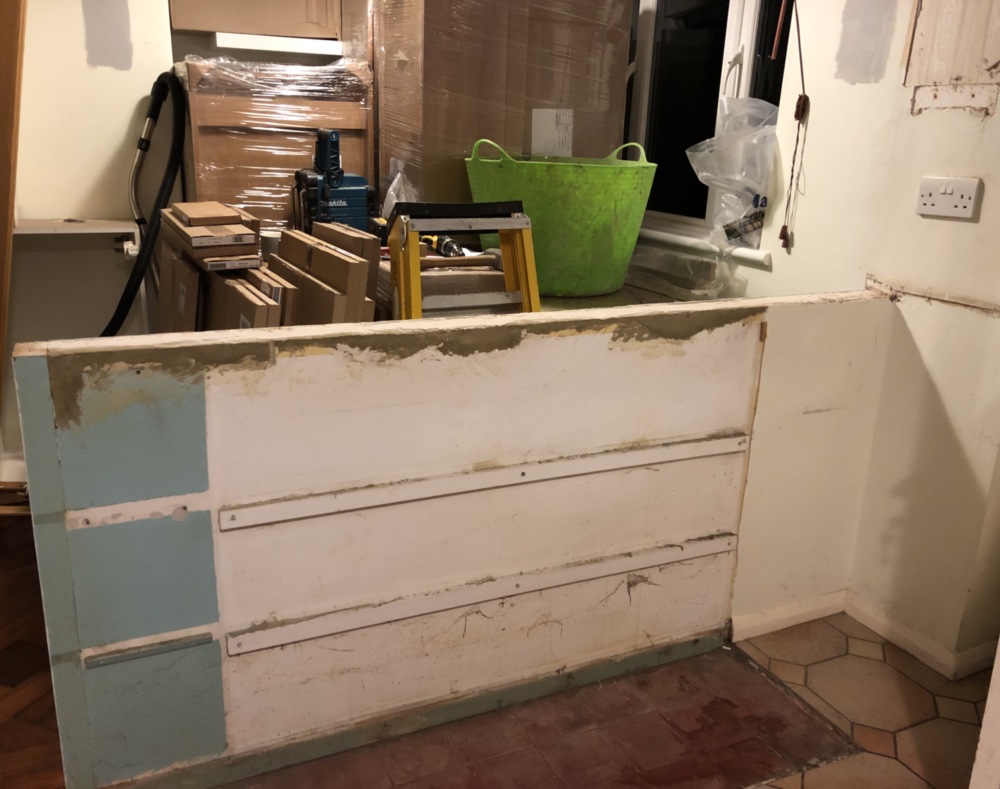 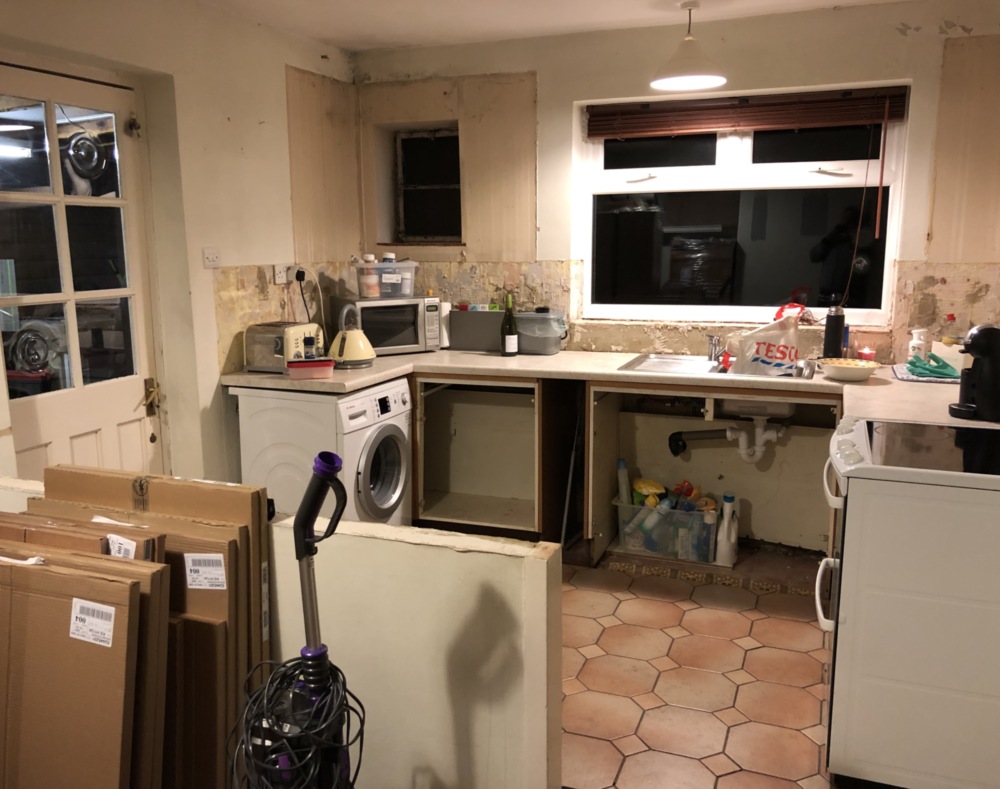 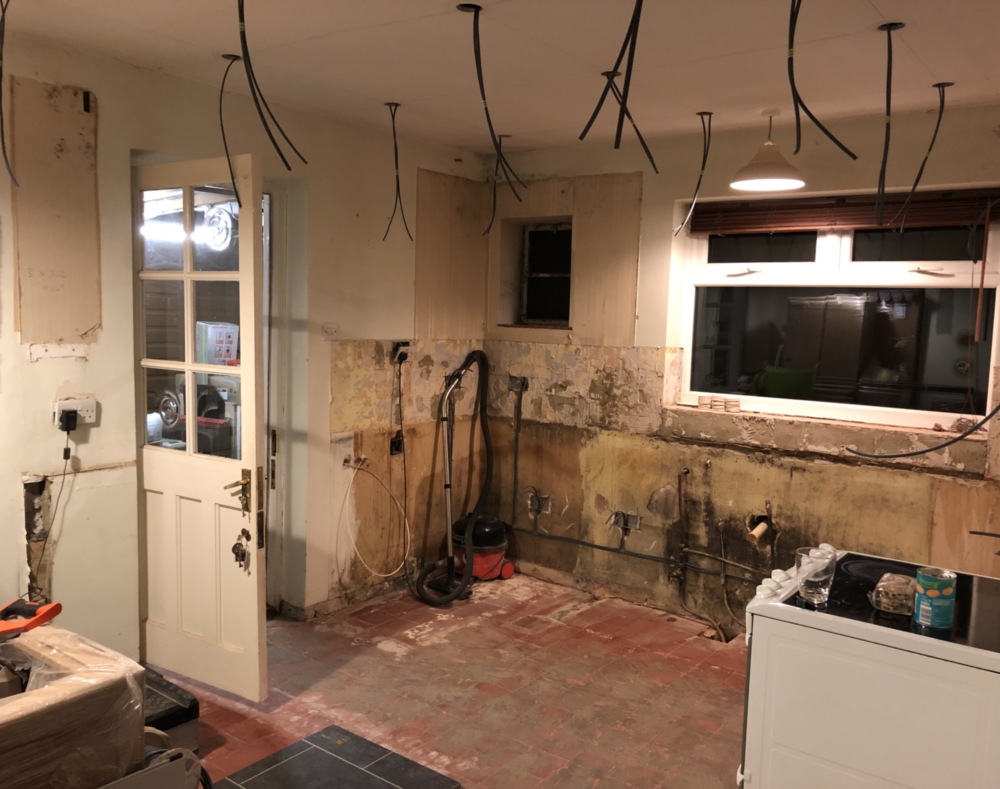 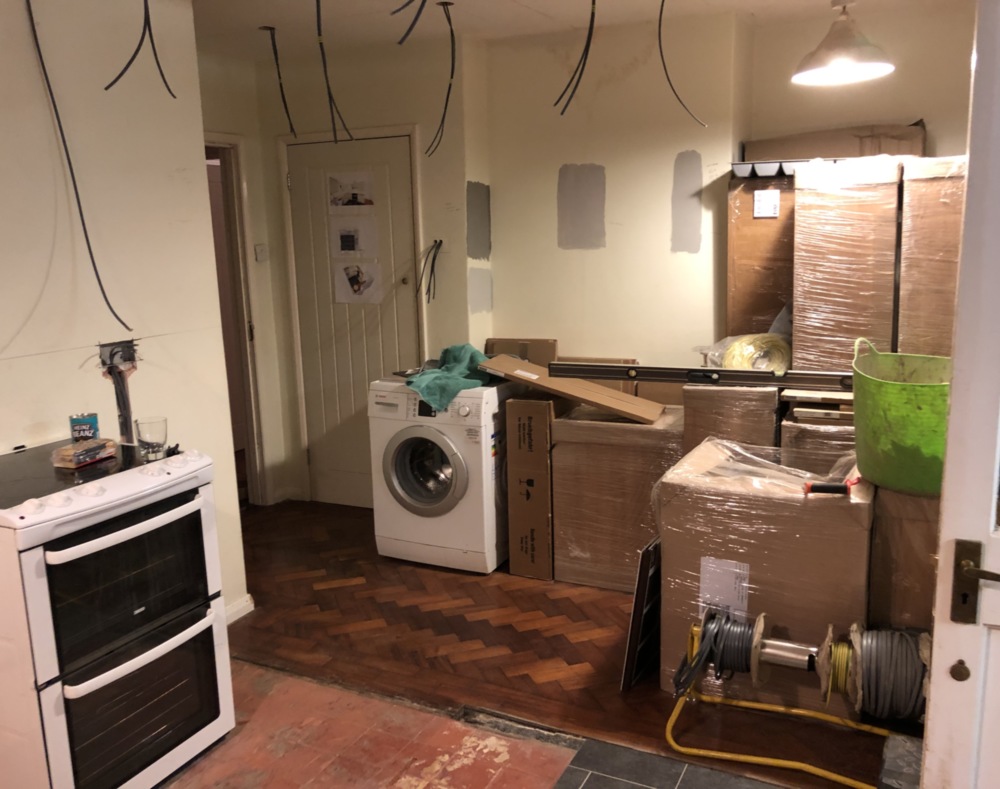 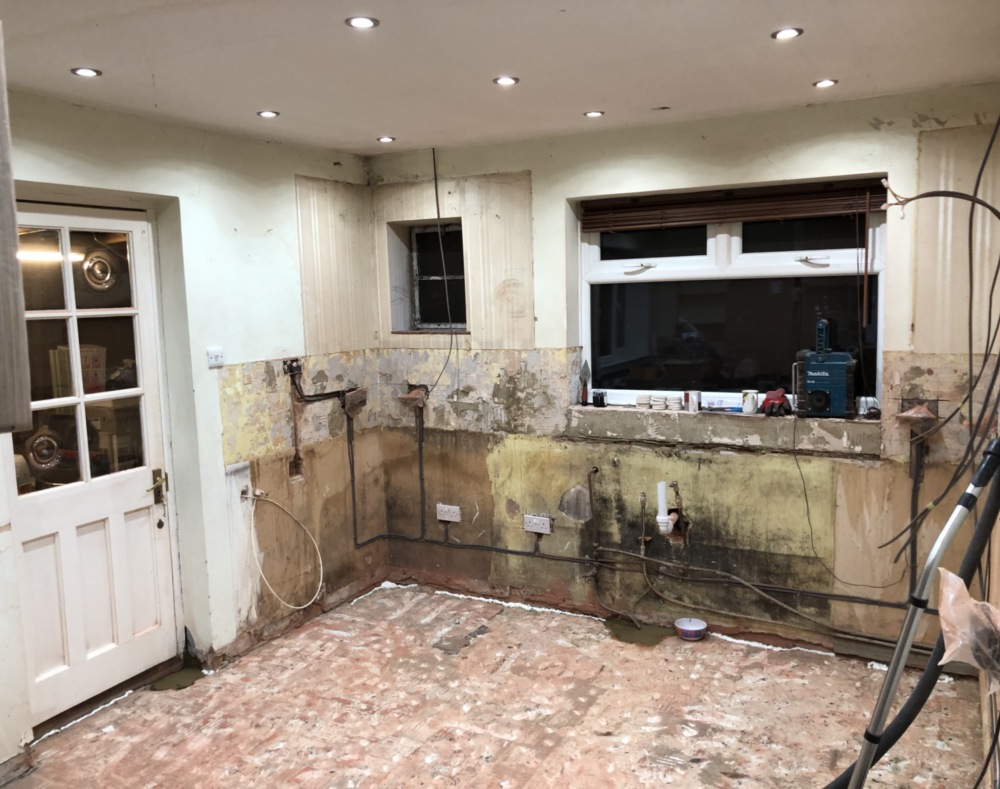 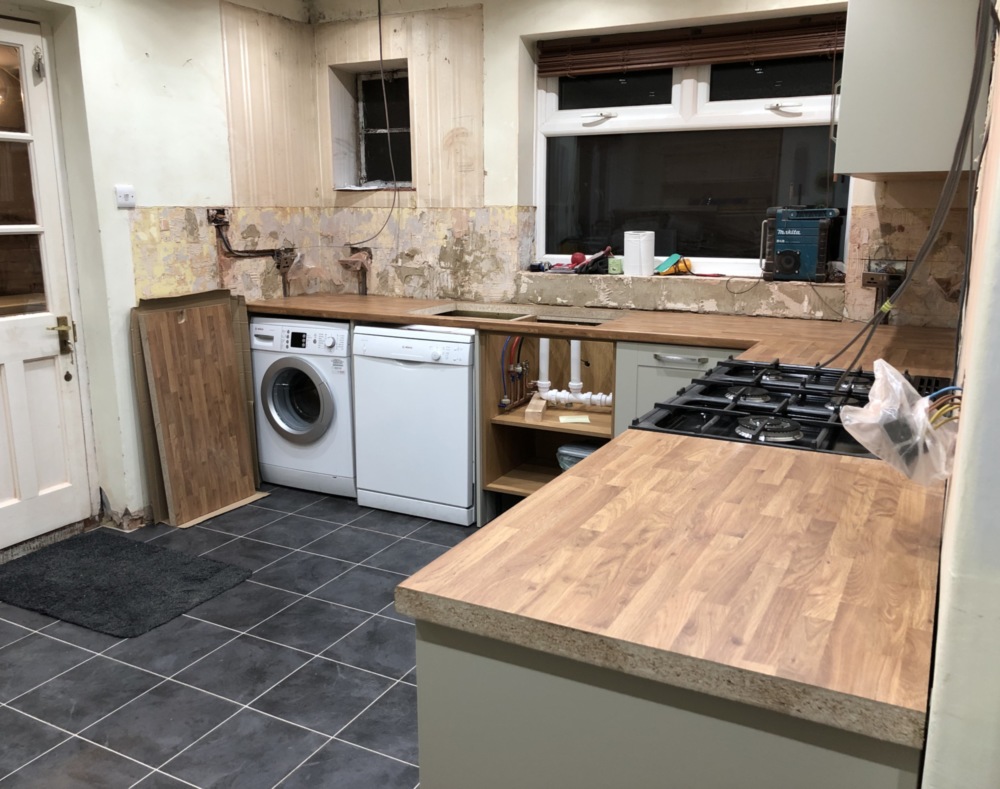 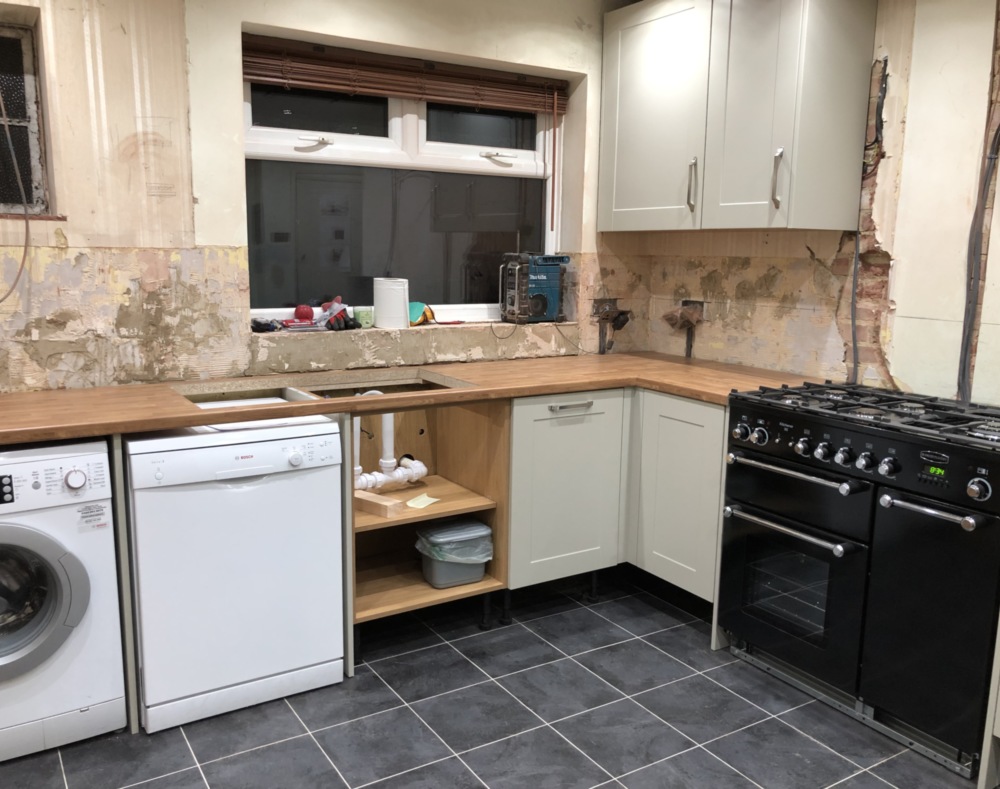 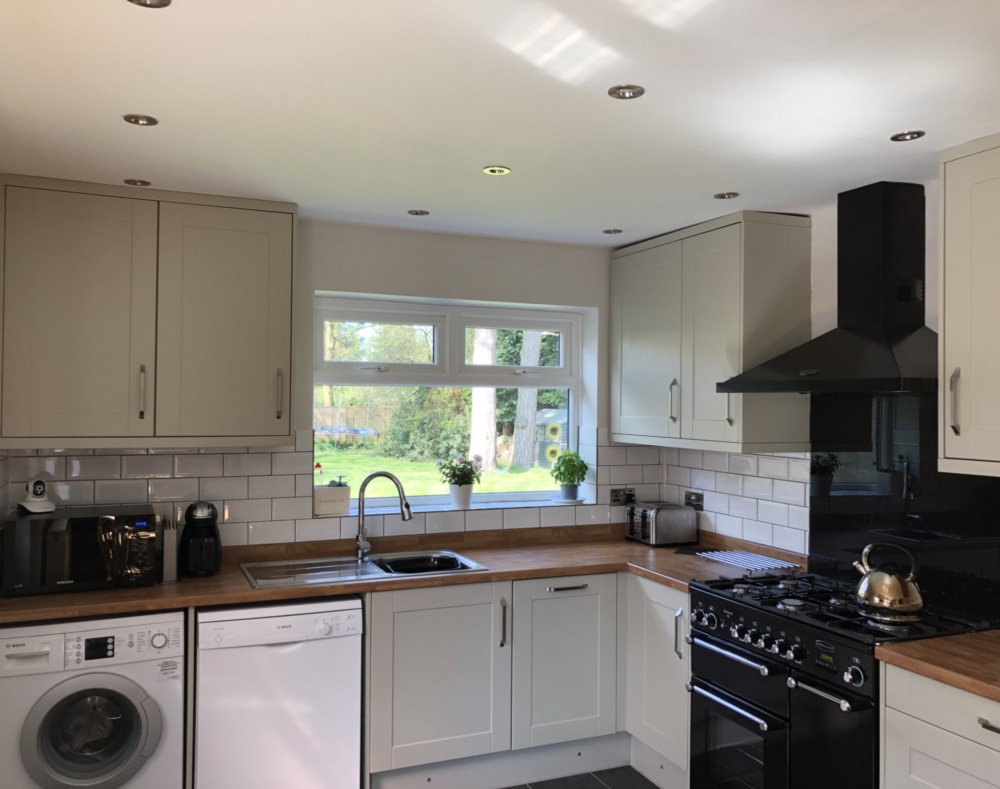 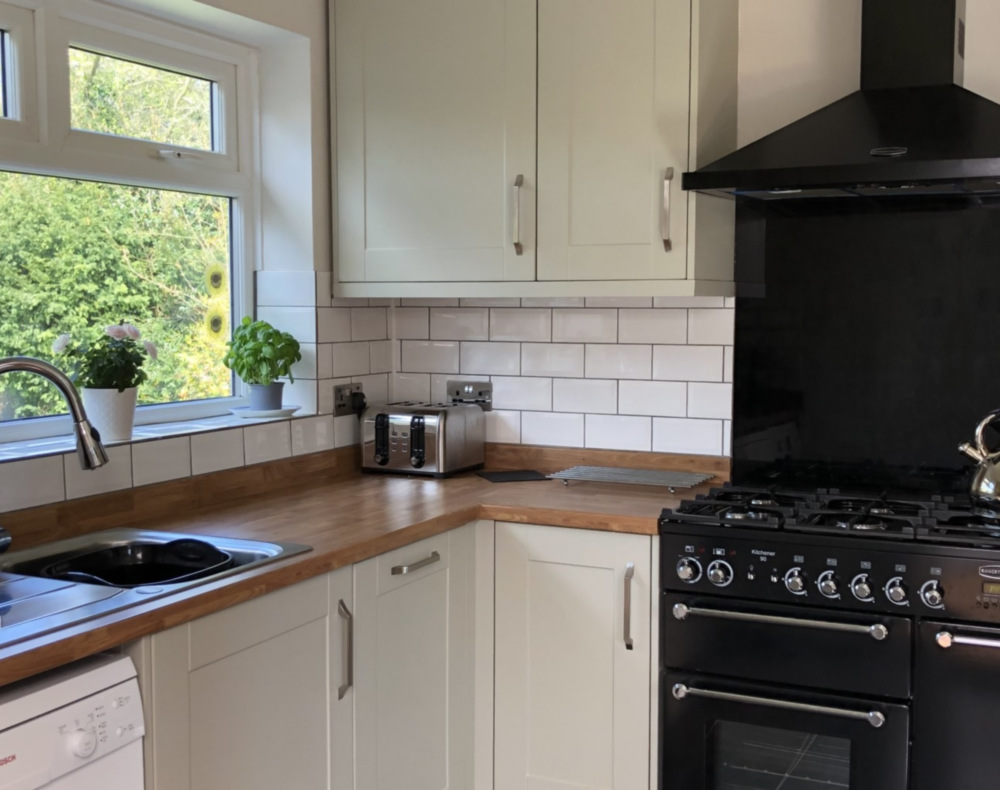 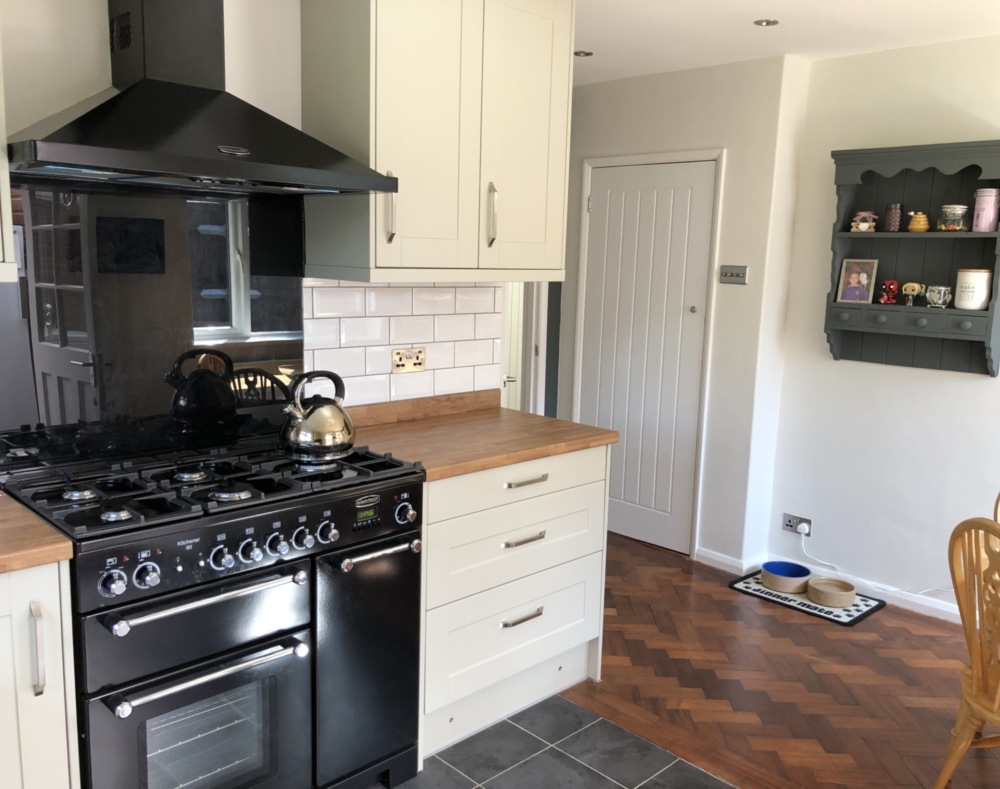 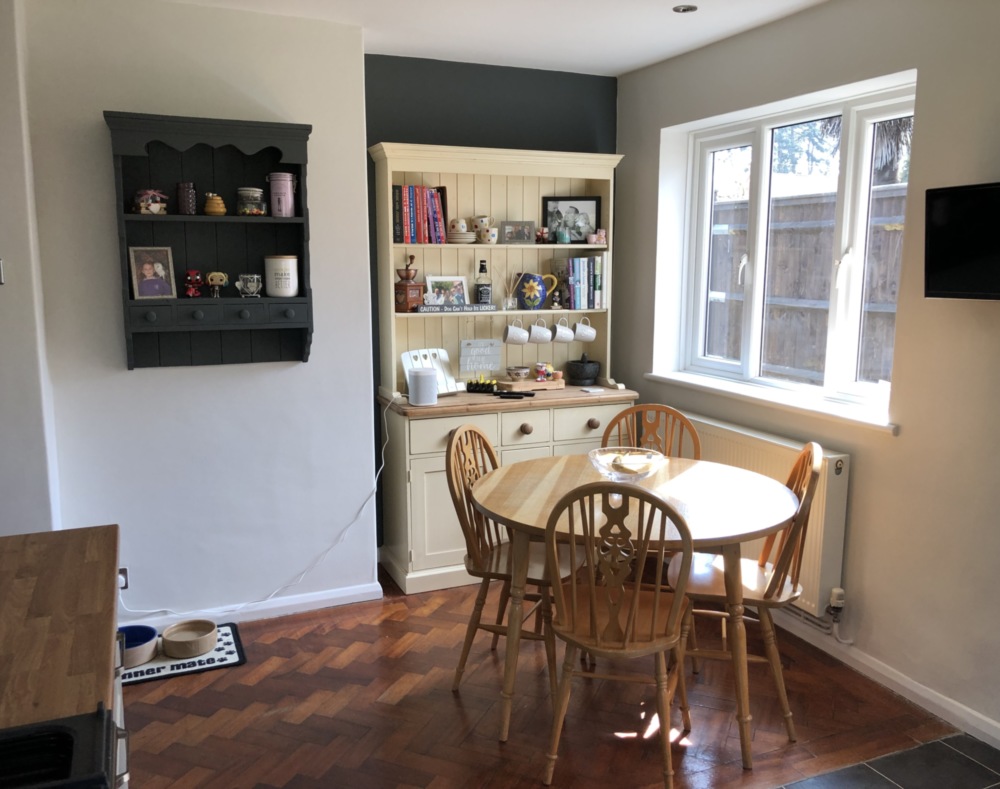 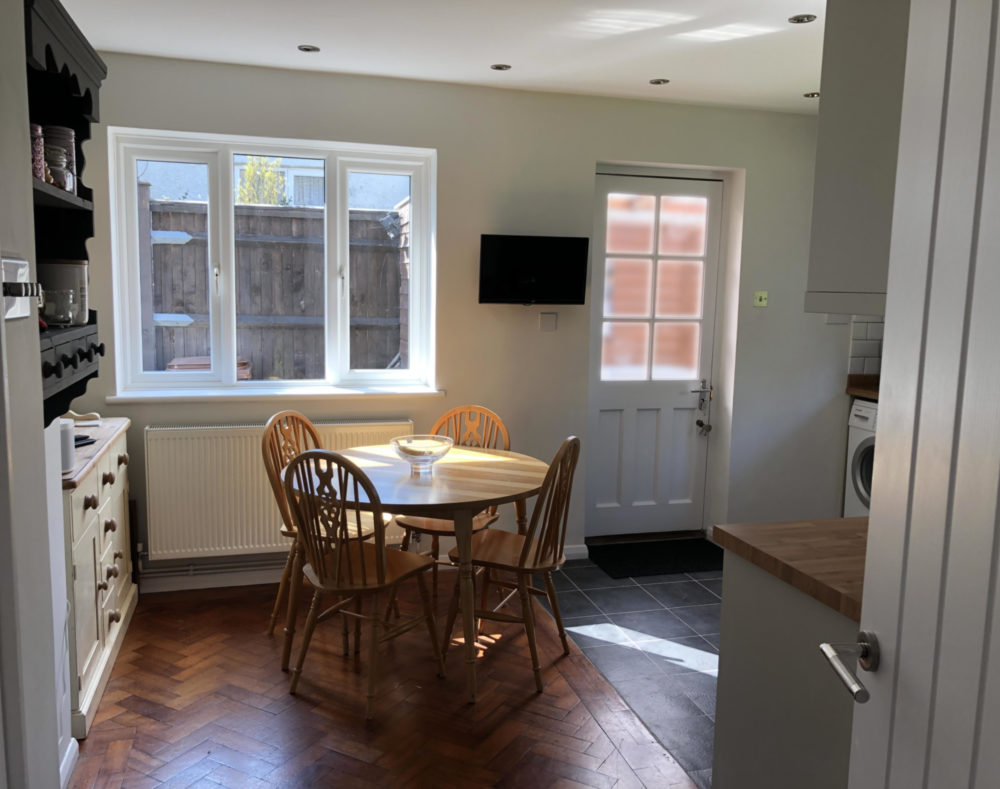 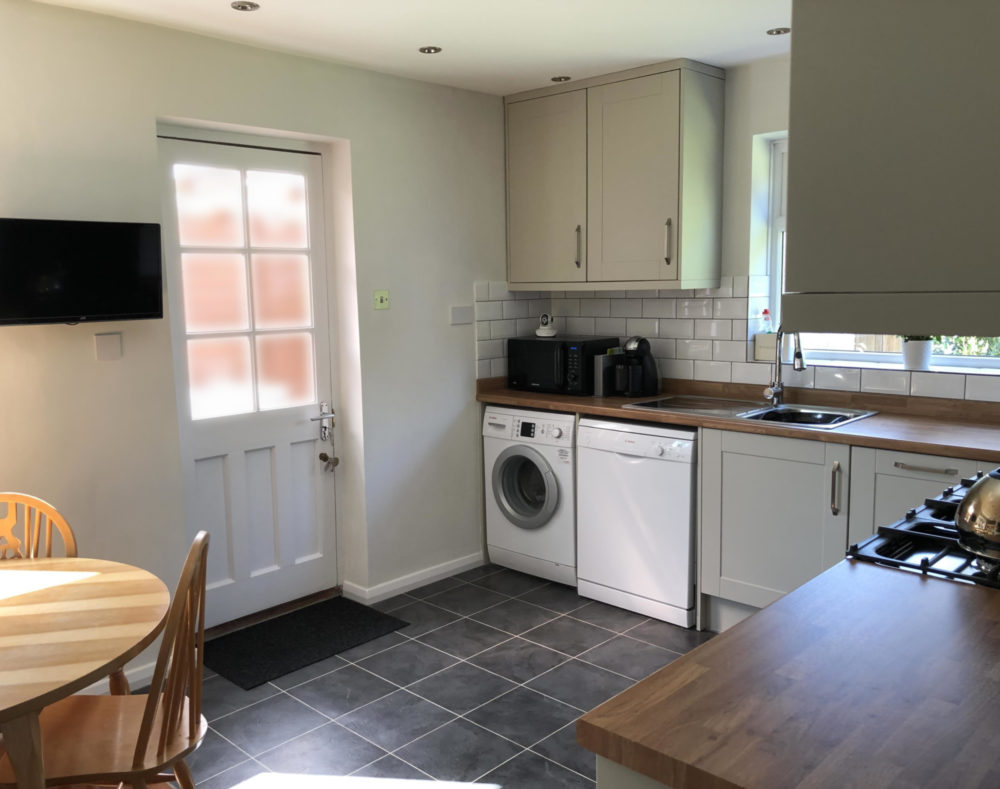 Wayne from Sandford Homes, came recommended to us by a friend. What we liked about Wayne was his honesty, attention to detail and huge amounts of experience to help us decide what options best suited what we needed. It was also really nice that Sandford Homes were able to undertake all the work including electrical, gas and plumbing, to save us from having to find other reliable tradesmen with time at the critical steps to do the works needed. Wayne was really tidy and we even found him hoovering up at the end of each day! Very happy customers, thanks Wayne, would always recommend you.

Once we started the work, a few interesting challenges were uncovered. Working within the specific budgets of the customer we managed to find suitable and affordable options to satisfy all of them. As Sandford Homes are fully-quailified electricians, and CORGI Registered, Gas SAFE engineers, we were able to undertake all the work on the project; rather than out-sourcing elements to other parties. 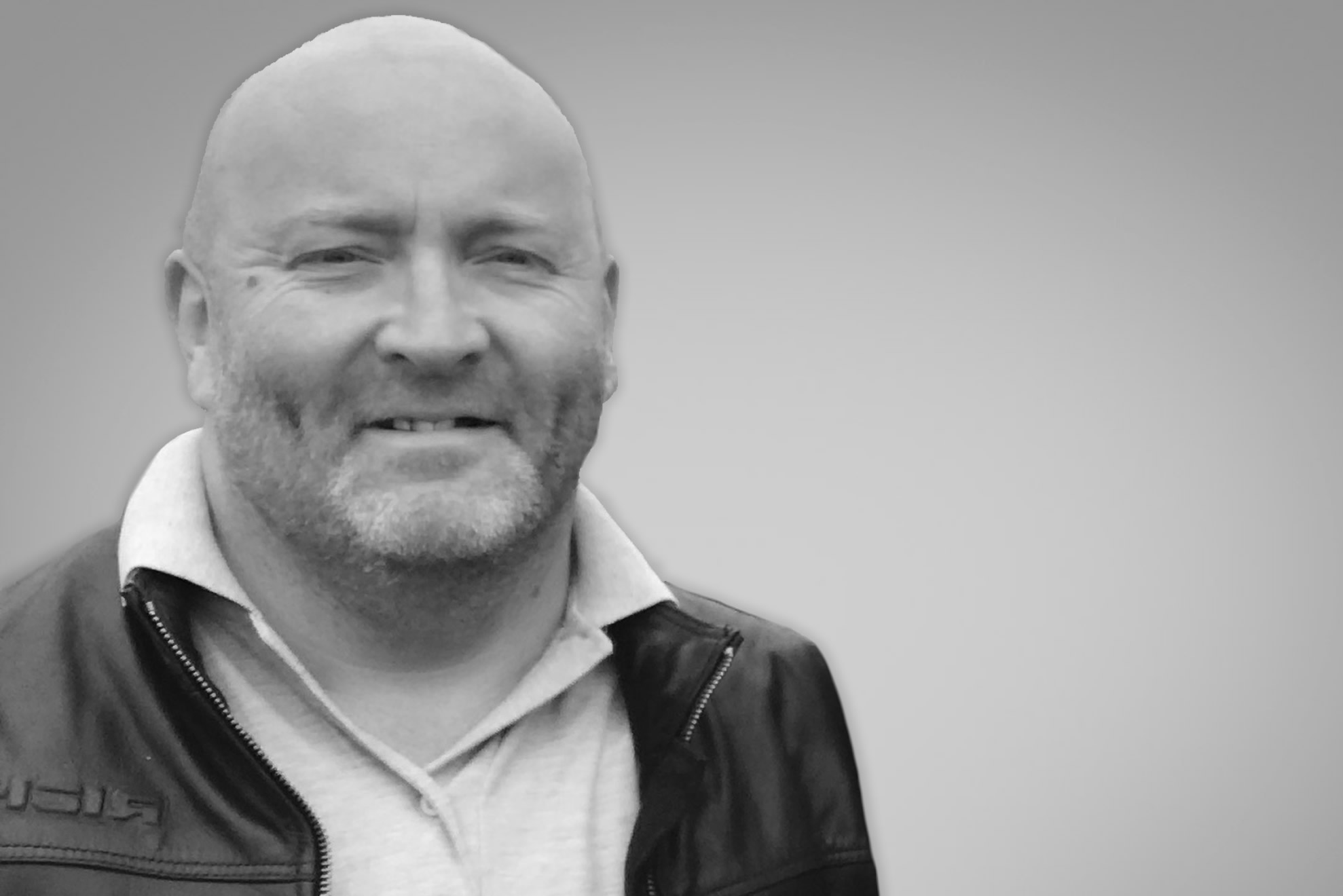